Throughout the arrival and aftermath of Hurricane Sandy, I gathered photos posted on Twitter of the storm’s impact from above New York. The pictures paint a portrait of a deeply resilient city preparing, withstanding, and recovering from the devastating effects of an unprecedented storm.

Great caption: “I need my autonomy back.” cxcart’s photo instagr.am/p/RgKFIzg1uS/

Lights on. Lights off. #NYC #Sandy There’s pretty much a line. Above it, lucky. Belo @ Empire State Building instagr.am/p/RghvRymWeQ/

Here we go again. #NYC #Sandy Entering the 4th day without electric/water for 1/2 of Manhattan @ The Victory instagr.am/p/RgNNXjmWZo/

The view down Smith St, Brooklyn at 7:30am. Bikes and feet remain far and away the best vehicles. #sandy twitter.com/theresaanna/stâ€¦

Crazy view of a city back to work from the 19th floor of a high rise right now over looking midtown Manhattan #NYC twitter.com/whiskygirls/stâ€¦

Our office is open for business. We feel lucky and grateful to back to work. Here’s the view from our roof. NYC love! twitter.com/stellarengine/â€¦

post-#sandy NY traffic so bad cars gridlocked on side streets at noon. at what point is a morning commute not worth it? twitter.com/cszabla/statusâ€¦

Water levels at LaGuardia Airport during the height of the storm.Waters have since started to recede. #Sandy twitter.com/PANYNJ/status/â€¦

During the peak of #Sandy, water levels rose at LaGuardia Airport. twitter.com/PANYNJ/status/â€¦

National Guard doing their thing. Did not think there would occasion for those trucks to be on front of our building. twitter.com/amarHoboken/stâ€¦

Water receding fast in Hoboken. About 6 inches to a foot now. Thank you to Mayor Zimmer and National Guard. twitter.com/amarHoboken/stâ€¦

Video: Water in #hoboken at Nwk btwn Grand and Adams incrementally receding at best. 4ft. We are inaccessible. #Sandyyfrog.us/06jw4qhkhprcsqâ€¦

These cars parked last night on Observer Highway in #hoboken are clearly being moved by current. cc @cityofhoboken twitter.com/amarHoboken/stâ€¦

Power out in #hoboken. #sandy twitter.com/amarHoboken/stâ€¦

Back of #Hoboken is a river. Streets completely flooded past Newark and Adams. #Sandy twitter.com/amarHoboken/stâ€¦ 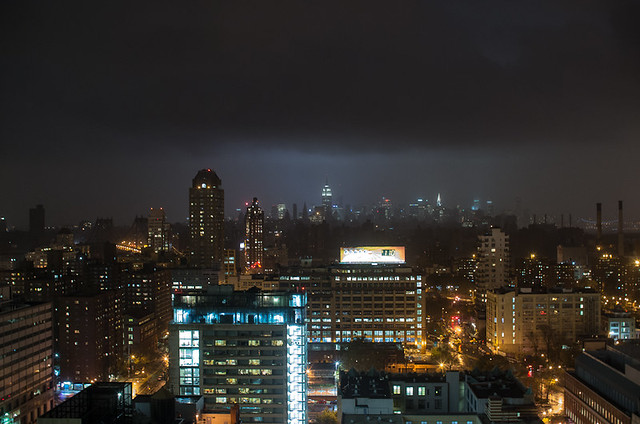 Day after Sandy in Manhattan. From 57th Street @buzzfeed flic.kr/p/dpeXPm

The Empire State is the only light in the sky #sandy@ New York City Marble Cemetery instagr.am/p/RY1mJ3Kp5i/

Found on Instagram. This is a current photo of a NYC Taxi parking lot. Pray for us instagr.am/p/RazgjfttWF/

Hope just appeared over the skies of Manhattan. twitter.com/jodikantor/staâ€¦

the Empire State Building is all that’s lit in NYC.. stay say my favorite city in the world. #nyc #sandy instagr.am/p/RZMyOVEp1Q/

Current view from 51st fl of the NYT building on 40th St. looking east. Many buildings at far right are without power. nyti.ms/SqcQ88

Current status at 09:17 PM with power going out instagr.am/p/RY0E1PBzWU/

A raging river pouring into the battery tunnel. twitter.com/AlexSilverman/â€¦

What a photo! Half of #NYC is in blackout while the other half is still lit up! #Sandy by @nicksumm twitter.com/barrabest/statâ€¦

Another photo of UN Headquarters in NYC during Hurricane #Sandy on Monday. View from across the East River. twitter.com/UN/status/2630â€¦

And the lights go out in the Village. instagr.am/p/RYue5_koDz/

Friend sends this photo of storm from downtown Brooklyn twitter.com/danarubinsteinâ€¦

The water came up to my knees when I joined my neighbors on the front stoop. @ Avenue C and 14th Street instagr.am/p/RYnABRRiEo/

Power just went out in lower Manhattan, but not all buildings. Pic: yfrog.com/khzndachj #Sandy @wnyc

The East River and rain flooding my neighborhood. #Sandy instagr.am/p/RYjxJss88F/

A photo shot of hurricane in Ridgewood Queens, but wait? I don’t see any flying tree barks? twitter.com/joefalconeri69â€¦

The FDR drive on the east side of Manhattan is already fully underwater twitpic.com/b8io4t #sandy

Riverside Blvd between W 62nd & W 72nd is not at high risk for flooding, despite proximity to Hudson. Why? This slope twitter.com/ElevatorView/sâ€¦

Twitter stream moving fast. I forget who RT’d this but, here you go. (Re: crane.) twitter.com/cmwdotme/statuâ€¦

Sandy’s winds cause crane collapse atop One57 luxury condo under construction in NYC bit.ly/V0Wd4X

One of our friends just gave us this photo of the crane hanging one thousand feet up over #nyc #sandy #nypd twitter.com/nycarecs/statuâ€¦

@patkiernan it wasn’t hanging like that yesterday. In this close-up from @jonathanwald it looks badly mangled instagr.am/p/RYGSPsKWiS/ #Sandy

The 148th Street Yard at northern end of 3 Line is sandbagged and ready for #Sandy flic.kr/p/doShWN

The view across the river from the Brooklyn promenade wind picking up and water rising. #sandy @nbcnewyork twitter.com/shimon4ny/statâ€¦

@startingptcnn Thank you for your amazing coverage Soledad! Here we are marooned in Red Hook, Brooklyn!! #Sandy twitter.com/greenpainting/â€¦

Cameras on the 51st floor of the New York Times Building (620 Eighth Avenue) are updating every minute, and Bloomberg is broadcasting live “Sandycam” video from atop Bloomberg Tower (731 Lexington Avenue):

On 51. Our hurricane Sandy cameras. instagr.am/p/RWcBF4i1vM/

I’ve been talking with Mark and his work is fascinating, so I invited him to write a few guest posts for Using Wiki in Education. Here’s a bit about him: Mark Bell is a researcher, computer programmer and father. He specializes in social networks in virtual

The following is a guest post from Patrick Berry and Scott Jungling of CSU Chico. First in a three part series this week: Axiom: People want what they cannot have. It was a familiar story: a new technology arrives on campus,

Transit hubs in the New York area have long been catalysts for the growth of their surrounding neighborhoods, and the shared economy of the NY & NJ urban core. Five terminals were constructed along the New Jersey shore of the Hudson River during the rail boom of the late 19th Century: Weehawken Terminal, Hoboken Terminal,…